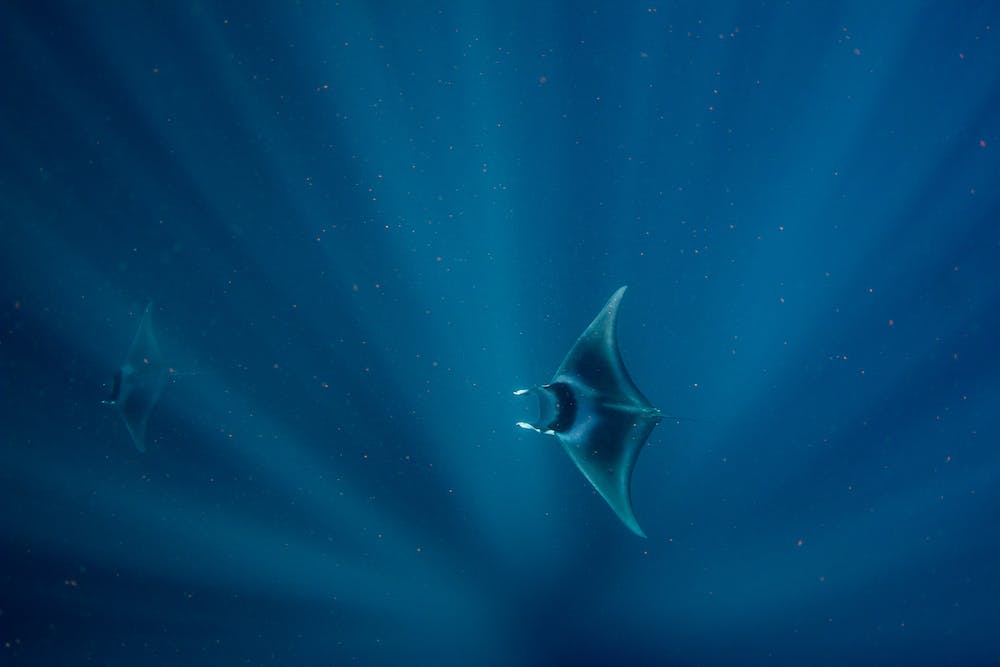 Within the aquatic realm, I often try to measure an animal’s intelligence with the curiosity which it displays. The more curious an animal, the more “brains” it has. As fish go, manta rays are certainly the intellectuals of the Ningaloo Reef. Pound for pound, they boast the largest brain of any elasmobranch or bony fish, alike. They are intelligent and sentient, and they display this with intimately interactive behaviour. Coming eye to eye with one of these placid giants is a humbling experience, their kind-hearted gaze leaving one questioning one’s own existence

As eagles of the ocean, manta rays will navigate the tropics, tracking current lines, wealthy in plankton, from which to feast. Using arm-like cephalic lobes, mantas channel vast volumes of food-rich water into their yawning mouths, filtering out the tinniest of morsels, in an effort to sustain their gigantic selves. It seems a common theme in The Ningaloo, the abundance of amazing megafauna.

When mantas aren’t feeding, they’ll take the opportunity to be cleaned of dead skin, and parasites that have latched to their bodies. As for most animals in the ocean, there are cleaning services to which large elasmobranchs, such as mantas, can attend. Coral bombies, harbouring wrasse and butterflyfish, are the preferred ports o’ call. Several minutes hovering over these stations can be enough to rid themselves entirely of copepod parasites. This behaviour is, of course, mutually beneficial for the manta and the “cleanerfish” and manta rays will often utilise the same cleaning station time and time again, keeping the helpful reef fish well fed.

Not to be mistaken for their close cousins the devil rays, there are two species of manta which frequent the food-rich waters of Australia’s Coral Coast. The larger (having a wingspan of up to 8 metres) oceanic manta ray is by far the more elusive of the two, occasionally visiting the back of the reef for a feed or to be cleaned at one of Ningaloo’s many “cleaning stations”. As their name suggests they live a life of a voyager, seldom spending much time in the shallow waters of coral reefs. On the contrary, again as the name suggests, the smaller reef manta is far more “at home” in the bustling waters of coral reefs.

Like most ‘manta hotspots’ around the world, the Ningaloo is subject to two populations of reef manta rays. In Coral Bay, dwells a resident group of mantas, numbering in their hundreds strong. Throughout the year, Exmouth will be home to varying groups of transient mantas. They come and go, exploring the reefs and islands of Western Australia’s rich coastline.

Looking for mantas around Exmouth?

In failing joining an eco-tour or hiring a tinny for the day, pop down to Bundegi or Town Beach and keep eyes peeled for wing-tips breaking the surface of the water. Manta rays will often form feeding or mating aggregations and will spend a lot of time near the surface.