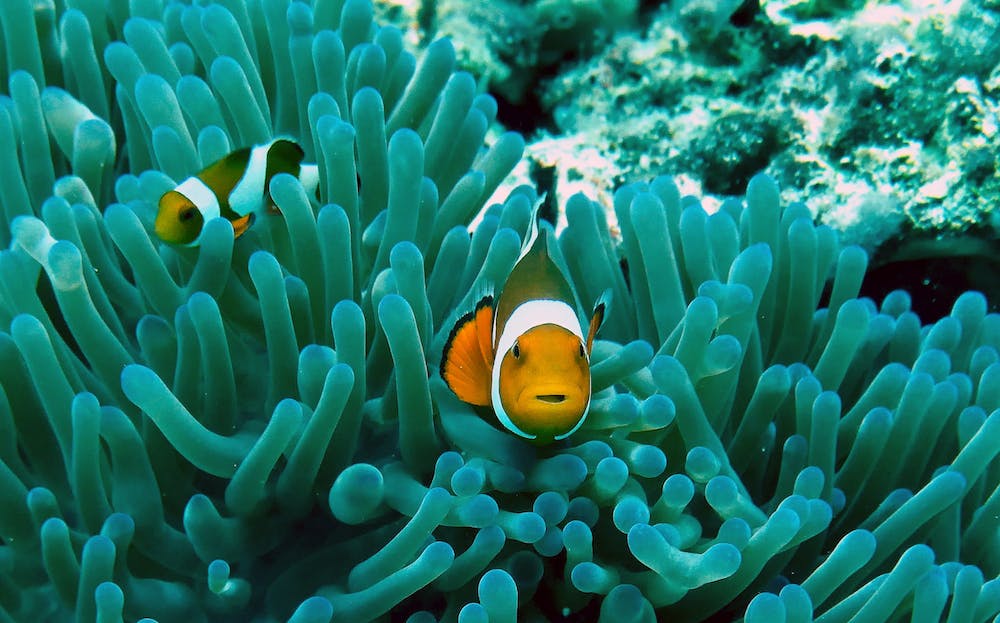 Anemonefish are fiery personalities, defending their homes with aggression which far surpasses their size. No intruder is too big for the hearty “clownfish”, and they are loved by divers and photographers for their animated, territorial displays. It’s probably for this reason that they were chosen to star in the Disney Pixar Blockbuster: “Finding Nemo”.

“I’ve found him!!” The words that virtually every anemonefish on the Ningaloo Reef has become used to hearing on a daily basis. Of course, not all “clownfish” fall under the heading of “Nemo”.  Tomato Anemonefish, for example, are just one of several species that are far more abundant (here on the Ningaloo) and probably tire of the excitable exclamations. While differing in appearance though, all anemone fish share very similar life-cycles.

The early stages of life for “clownfish” are fairly standard by the way of the ocean. They hatch from eggs and drift the sea as larvae until coming back to the Ningaloo as tiny replicas of their parents. Finding the reef is not left to chance. Coral reefs are bustling environments that generate an impressive volume of noise. From the snapping of shrimps, to the crunching of beaks on coral, juvenile anemone fish follow these sounds until out of the blue, they find a home in an anemone.

Such anemones may contain anywhere from 1 to 15 individual fish. All born male, so during adolescence there’s no stress of competing for a young maiden’s attention. No pulling on the pigtails of the girl you fancy. And no “boys against girls” horseplay in the playground.

In fact, within an anemone, there is only one female fish and she’s certainly no mug. Very much ruling the roost, she spends her days warding off potential predators (from herself, her colony, and from the anemone itself). In return, the anemone offers a safe haven for “clownfish”, as well as providing scraps of food for them to feed upon. By her side in their anemone castle, is one dominant male fish. Everyone else has to settle with inferior status. This structured hierarchal society, however, can and will change. If that dominant female was to disappear for example, much like poor Nemo’s mum, something quite remarkable happens. Anemonefish are sequential hermaphrodites meaning they will change gender at a certain time in their lives. This point is met when the suppressive female is removed from the colony, prompting the dominant male to abandon his masculinity and take on the role and reproductive organs of a female. Following this, the largest adolescent fish will mature and take his place alongside the new “lady of the anemone”.

Anemonefish aren’t the only ones on the reef to display hermaphroditic tendencies. Grouper and wrasse (both of which are present on the Ningaloo in abundance) share similar traits. But why? For a start, this unusual system minimises the chance of an anemone ever being without one sex or the other (female fish can self-fertilise, but this helps make the breeding procedure much simpler). On top of this, the process creates a robust gene pool. Only the most significant, most dominant individuals will ever have the chance to change sex, mate, and pass on their genetic material. Inferior fish will see out their lives as they are, and take with them, their humble genetic lineage.

So from egg to alpha female, “clownfish” live fascinating lives, bound by a societal culture that may seem alien to us but, when considered, makes just as much sense as our own. Head down to Turquoise Bay in Cape Range National Park to see if you can spot one of these enchanting little fish.