Skip to primary navigation Skip to content Skip to footer

Live Ningaloo – Who are We?

Live Ningaloo was founded in 2016 by Murray Pattison and Sonia Beckwith and operates Whale shark and Humpback whale swim tours from Exmouth, Western Australia, in the World Heritage-listed Ningaloo Marine Park. We offer both group tours and private charters.

Prior to 2016, while operating his business as a catch-and-release fishing guide for the exclusive Sal Salis Ningaloo tented camp, Murray identified a niche for a small, luxury bespoke operation in the highly competitive Whale shark tour business in Exmouth.

Whereas every other established operator (11 in all) accommodates 20 swimming passengers + 3 observers per trip, Marine Parks’ regulations stipulate that only 10 people can swim with a Whale shark at a time. This necessitates rotating passengers, with each guest getting in the water on alternate swims.

Murray reasoned that, with a limit of 10 passengers, he could operate with far greater flexibility and each guest would get every opportunity to swim with a shark. It would also ensure less disturbance to the shark and more time for guests and sharks to get comfortable with one another.

He and Sonia purchased the 12-metre (40-foot) luxury vessel, Wave Rider and commenced operations at the start of the 2016 Whale shark season – the youngest licence holders in Exmouth, by far.

“At that point, we knew we were onto something,” says Murray.

They’ve gone on to adapt the other tours they offer to maintain the single swimming group atmosphere (e.g. Humpback whales 7 swimmers + 3 observers) providing a better chance at a lifetime memory.

Live Ningaloo has gone on to win a number of industry awards and continues to go from strength to strength.

Today they live in Exmouth and play an active role in Live Ningaloo along with participating in the community, region, and state to further sustainable tourism, better communication and systems to lift tourism within the State and Australia. 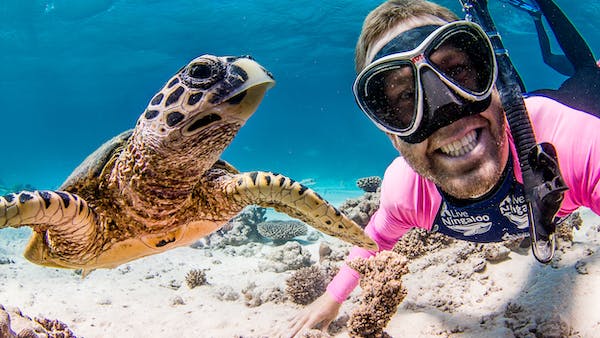 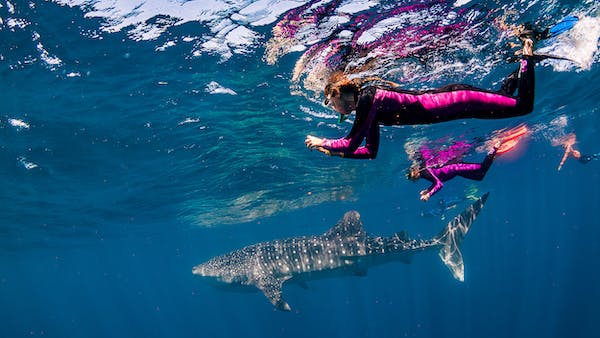 The World Heritage-listed Ningaloo Marine Park stretches nearly 300 kilometres along the west coast of the North West Cape of WA.  Ningaloo is the world’s largest fringing coral reef, accessible directly from the shore and boasting an abundance of beautiful corals and amazing marine life. It is known as a coral reef biodiversity ‘hotspot’ and has the second-largest number of species found within a limited range of any coral reef in the world.

Recent research indicates that Ningaloo reef continues to be one of the world’s most pristine, its health un-diminished in the past 30 years.

Ningaloo Reef is famous for the abundance of Whale Sharks and Humpback whales that swim through its waters and also attracts significant populations of manta rays, dugongs, turtles, rays, and other types of sharks and whales.

It’s one of the few areas in Australia that can boast the ‘Range to Reef’ experience, where you can experience the stunning canyons of the Cape Range National Park and the colourful coral of the Marine Park in close proximity.

Exmouth’s permanent population of around 2,700 swells to more than 6,000 during peak tourist season, when visitors travel from all over the world to see Whale sharks and other marine life up close. 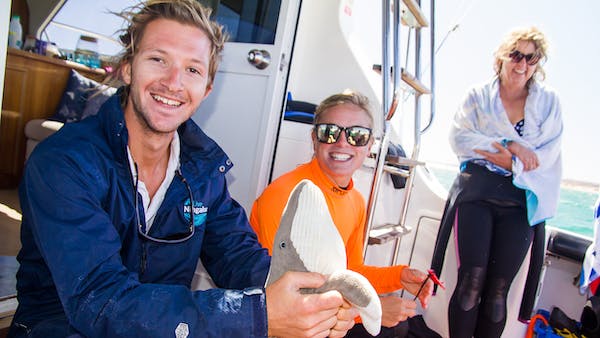 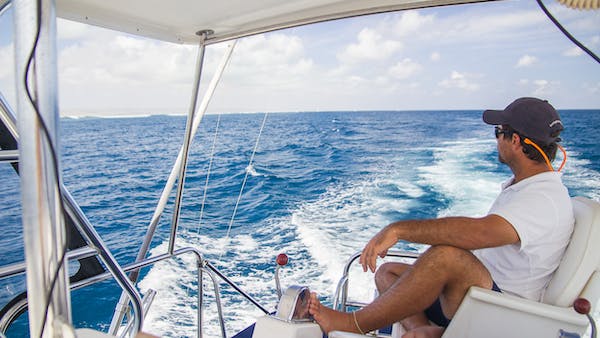 Live Ningaloo’s luxury 12-metre (40-foot) power vessel was custom built in Queensland, for Australian conditions.  She combines safety and reliability with sea-going ability, comfortable interiors and a spacious back deck.

Wave Rider is fitted out for style and comfort. Her features include:

Exmouth is located a two-hour flight or two-day scenic drive from Perth, the capital of Western Australia, on the tip of the North West Cape, a peninsula extending into the Indian Ocean.

Qantas flies daily to Learmonth Airport, the airport for Exmouth, with connections to all other Australian capital cities and international destinations.